Super fluffy, soft and delicious cinnamon rolls topped with an irresistible chocolate frosting/icing. Making chocolate cinnamon rolls is a lot easier than you might think! All the hard work is done by the stand mixer so you can focus on the fun parts.

Just like my heavenly treat chocolate brioche babka, the simple yet key technique to fluffy and soft rolls is by kneading the dough for 10 minutes with a stand mixer!

Before we begin, just make sure you have a stand mixer with a dough hook. Without it, it'll be extremely hard to get the cinnamon scrolls perfectly light and fluffy!

Like any yeasty dough type of recipes, you want to firstly, get the yeast going.

Simply combine warm milk, instant yeast and a little sugar. Mix it all up and set aside (covered or uncovered) for about 10 minutes and it'll get all bubbly like picture #1 below.

Once the yeast mixture is ready, whisk in an egg and oil. Then, pour it into the mixing bowl with the rest of the dough ingredients (flour, salt, sugar). Mix on medium speed for 10 minutes and it'll become super stretchy and sticky to the touch. But as you can see in image #4 below, it shouldn't be sticking to the sides of the mixing bowl.

This is the secret technique to fluffy and soft cinnamon rolls! Kneading the dough for 10 minutes with the stand mixer. What this does is helping the gluten in the flour to develop and form structure. Which is what's needed for the rolls to puff up nicely. So don't stop once the dough is formed, keep kneading!

Once the dough has had 1.5 hours to rise, roll it out on a lightly floured (clean!) surface with a rolling pin. Roll the dough into a rectangular shape, about 30cm/12inches by 45cm/18inches. The longer the dough is, the more layers the cinnamon rolls will have.

Evenly spread the cinnamon butter (cinnamon, butter, sugar, salt and vanilla essence) all over, making sure the edges are covered too. Gently but firmly roll the dough up with both hands into one large scroll. Like image #9.

With a dough scraper or a knife, divide the long scroll into 8 equal pieces. An easy trick is by cutting down the middle first and repeat for each half until you've got 8 pieces.

Place the cinnamon rolls inside a lined tray, cover, proof for 30 minutes. It'll puff up and increase by about 50% in size. Bake at 180°/360°C for 23 minutes. The scrolls will puff even bigger in the oven, just like the pictures!

And voila! Big, fluffy, golden and super soft cinnamon rolls! At this stage, they'll taste and smell heavenly. So good.

I don't know about you, but I find watching the dough transform super fascinating. Like, what is this magic?

Ladies and gentlemen, this is the image we all want to see when tearing apart a cinnamon roll. SOOO fluffyyyyyy!

Tips for making this perfect every time

How do you keep cinnamon rolls from getting hard?

As soon as the cinnamon rolls are iced with the chocolate frosting, pop them straight into an airtight container (or zip lock bags) to keep them from going dry and hard.

How long do cinnamon rolls last?

They last about 2 days in an airtight container at room temperature. About a week in the fridge and about 6 months in the freezer.

Why is my dough still sticky after kneading?

This is because it's nicely hydrated! The dough needs to be well hydrated as this will help make the cinnamon scrolls light, fluffy and soft! Just like my chocolate brioche babka where the dough is well hydrated, making it delicious and soft.

Best way to eat leftovers (if any!)

Like doughnuts, these chocolate cinnamon rolls will start going a little stale after a day or two. Especially because they're homemade. Here's a little tip: when eating the next day or beyond that, microwave them for about 10 seconds (depending on your microwave), uncovered. They'll turn soft again (what stale?), perfect with a cup of tea or coffee!

Aside from watching these golden scrolls transform from dough to perfect deliciousness, I find it equally enjoyable spreading the luxurious chocolate frosting on these babies.

The perfect icing on the top! So easy to make, simple ingredients aaaaand, all the hard work is, once again, done by the stand mixer. Simply put icing sugar, cocoa powder, a pinch of salt and ground coffee powder (or instant coffee powder) into a mixing bowl attached to the stand mixer. Mix on medium speed and add milk, a little at a time, until frosting reaches a thick but spreadable consistency.

Made this Chocolate cinnamon rolls recipe? Let me know your thoughts or questions by dropping a note in the comments section below! I'd love to hear from you 🙂 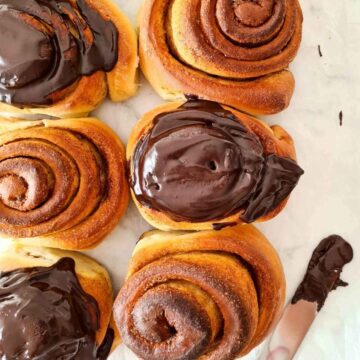 Prevent your screen from going dark

Note 1. Warm milk will help the yeast to activate faster and grow. Do not use milk hotter than 43°C/110°F as it'll be too hot and kill the yeast. Yeast thrives in warm, moist conditions. Note 2. Rising dough in a warm place an easy place is next to the window, not directly under the sun. If it is a particularly cold day, warm your oven up to about 27°C/80°F (should take about 3 - 4 minutes) then turn the oven off. Place the covered dough inside the oven with the door closed. This is the perfect temperature for the dough to rise nicely. Keep the chocolate cinnamon rolls moist, from drying out. As soon as the cinnamon rolls are iced with the chocolate frosting, pop them straight into an airtight container (or zip lock bags) to keep them from going dry and hard. Storage Last about 2 days in an airtight container at room temperature. About a week in the fridge and about 6 months in the freezer.  Reheat in the microwave if eating the next day and beyond for about 10 seconds in the microwave for soft and warm cinnamon scrolls!
Tried this recipe?Mention @Casuallypeckish or tag #casuallypeckish!

All in for a "what's for dinner" conversation. When I'm not at the gym exercising or grocery shopping, I'm making a mess in the kitchen and creating something yum along the way.

Learn more about me →

Subscribe to my weekly newsletter and receive a free recipe e-booklet straight to your inbox!