Jump to Recipe Jump to Video

Juicy, plump and super delicious pork and chive dumplings! Pork and chive is a very classic Chinese dumpling combination and flavour profile (on par with pork and cabbage). The key to delicious dumplings, aside from perfectly seasoning them, is to use fatty pork mince. This is where the flavour and juices at!

With Lunar New Year just around the corner, this is the perfect dish to have on the reunion table on New Year Eve. To further impress your family and friends, also try my Har Gow (crystal prawn dumplings)!

If you're a dumpling enthusiast like myself, I recommend trying out my Vegetable Dumpling recipe. It's really delicious and well worth making! These dumplings are perfectly seasoned and filled with flavoursome ingredients: carrots, spinach, shiitake mushrooms and tofu which is a fantastic flavour carrier.

If you're a beginner or new to making dumplings, I recommend trying my super easy and popular Pork Wontons recipe. It's made using a fool-proof wrapping method, nothing fancy but gets the job done.

How to make pork and chive dumplings

There are 3 core steps to making dumplings:

If you're hardcore and prefer to make your own dumpling wrappers then of course that'll be 1 additional step. This recipe calls for simply buying and using the store-bought dumpling wrappers for convenience and efficiency sake.

This part is super easy and takes about 10 minutes to do. To start, wash, trim the ginger and garlic chives. Garlic chives tend to have soil on them and it's important to take more care and wash it thoroughly.

Peel and finely mince ginger by chopping or simply using a cheese grater which is my preferred method. See the image above under step 1.

Place all filling ingredients into a large mixing bowl and mix well. Best do this with 1 clean hand as it's just much quicker and easier. Once a uniform meat paste is formed, you're ready to wrap the dumplings.

To wrap these pork and chive dumplings, first, place about 1 heaped tablespoon worth of dumpling filling onto the middle of a dumpling wrapper. Notice how packed in the filling is? Packing the filling firmly and wrapping firmly is key to tight dumplings that will not fall apart when cooking.

Lightly dab the rims of the dumpling wrapper with water then pleat. Water helps the dumplings seal properly. See my video below on exactly how to do this!

Make sure to tightly seal the dumplings so that they don't break apart when cooking or get any water into them.

With a bit of practice, you'll begin to fly through these! I'd say it takes roughly 1 minute to wrap each dumpling. Faster if you're a seasoned pro! Even better, get your family or friends to help and cut the folding time significantly.

Having said this, don't rush, dumplings are a labour of love and attention.

Boil in lots of water

Boiling is the fastest and easiest way to cook dumplings. It takes just 3 to 4 minutes! Alternatively, you can pan-fry (yum, pot-stickers!) or steam. Both of these alternative options take a bit longer, about 10 minutes.

The boiling method is not that different to cooking ravioli. You've got to wait for the water to come to a fast boil then add the dumplings.

It's important not to mix or stir when the dumplings are cooking. As tempting as it may be! When still raw, dumplings sink to the bottom. Don't worry, they won't stick and will simply float to the top once they're cooked.

As a general rule of thumb, I let these pork and chive dumplings boil for about an extra 30 seconds to 1 minute once they've floated to the top. Just to double make sure they're fully cooked.

When ready, transfer the dumplings onto a large plate with a slotted spoon.

Repeat this for the second batch.

Serve as is or with a quick soy sauce, minced garlic, sugar and sesame oil dipping sauce. Otherwise, my favourite is serving with a side of my super fragrant homemade Sichuan Chilli Oil!

Tips and tricks for boiled pork and chive dumplings

What is the difference between dumplings and gyoza?

Dumpling is a broad term that covers all dishes that consists of pieces of dough with or without filling inside. However, all Chinese dumplings have filling on the inside. Gyoza is a specific type of Japanese dumpling, usually filled with pork and are pan-fried (not too different to potstickers). Gyozas tend to be thinner and longer in shape compared to the typical Chinese dumplings like this recipe.

How many calories are in a pork and chive dumpling?

About 70 calories per dumpling. This will vary depending on the fattiness of pork mince used.

What are boiled dumplings called in Chinese?

How do you tell if pork dumplings are cooked?

Once the dumplings have floated to the top of a boiling pot of water!

How long do you boil dumplings for?

About 3 to 4 minutes will do the trick!

Do you put raw pork in dumplings?

Yes! The pork will cook very quickly in the boiling water. All the juices will be encapsulated inside the dumplings, making them absolutely delicious!

Make ahead - how to freeze raw dumplings

Dumplings are perfect to make ahead and freeze in portions!

Simply place the dumplings in freezer-friendly trays (I use either my cutting boards or oven trays that would fit in my freezer) without overlapping. Place in the freezer for about 1 hour or until completely frozen. Once frozen, dumplings will no longer stick together and can be stored, stacked inside airtight containers and freeze.

Raw pork and chive dumplings last up to 6 months in the freezer.

To cook frozen dumplings, do not thaw and add them directly into the boiling water and cook for about 8 to 10 minutes or until fully cooked.

Any leftovers will keep well in the fridge for 3 to 4 days stored in airtight containers.

Made this recipe? Let me know your thoughts or questions by dropping a note in the comments section below! I'd love to hear from you. 🙂

If you're active on Instagram, take a picture once you've made this recipe and tag me on Instagram! I'd love to see them! 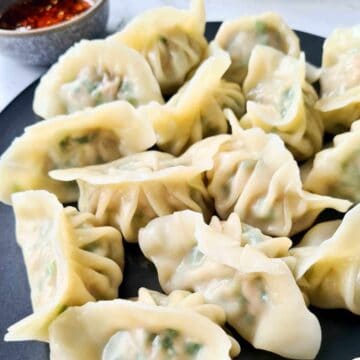 Juicy, plump and super delicious pork and chive dumplings! A very classic dumpling flavour profile (on par with pork and cabbage). The key to delicious dumplings, aside from perfectly seasoning them, is to use fatty pork mince. This is where the flavour and juices at! Watch the video above for exactly how to fold dumplings.
4.8 from 5 votes
Print Pin Rate
Course: Main Course, Side Dish
Cuisine: Chinese
Keyword: Pork and chive dumplings
Prep Time: 40 minutes
Cook Time: 4 minutes
Total Time: 44 minutes
Servings: 30 dumplings
Calories: 73kcal
Author: Genevieve

Prevent your screen from going dark

1. Mince ginger with a cheese grater. It's super quick and convenient! Otherwise, finely chop to a mince consistency. 2. Adding oil to filling is optional. I don't always get my meats from a butcher and my local supermarket only stocks lean pork mince. Adding a little oil will help tenderise the pork and make the filling juicy. 3. NEVER stir the pot in the first 3 minutes of boiling from the moment the dumplings have been placed into the boiling water. Every single time I do it, inevitably, a few dumplings break, water gets it, making them bland. Take care and tightly seal the dumplings before cooking. I like to do one last check just before boiling. If you see any corners that have fallen apart, simply dab with a little water and seal. Only add dumplings into the pot once the water is boiling aggressively and cook on high heat. You want the dumpling wrappers to cook very quickly so that there is minimal chance for them to soften and stick to each other. Place cooked dumplings onto large plates without overlapping. Otherwise, the dumplings will stick together when you're eating. I recommend 2 large plates for 30 dumplings. Heck, if you're not sure, use 3.
Tried this recipe?Mention @Casuallypeckish or tag #casuallypeckish!

All in for a "what's for dinner" conversation. When I'm not at the gym exercising or grocery shopping, I'm making a mess in the kitchen and creating something yum along the way.

Learn more about me →

Subscribe to my weekly newsletter and receive a free recipe e-booklet straight to your inbox!